Posted at 13:47h in Voyager news by verso
Share

Dr Phil Bell, Senior Lecturer within the School of Environmental and Rural Science at UNE, has been hooked on dinosaurs since the age of 3. Phil runs digs in western Canada where he is co-leader of the Northern Alberta Dinosaur Project and more locally in Lightning Ridge (NSW) exploring Cretaceous ecosystems. Phil is an authority on Australian dinosaurs, “duck-billed” hadrosaurs and dinosaur skin, although his research covers a wide range of dinosaurs and other Mesozoic vertebrates.

Phil, along with a group of researchers from the Universities of Saskatchewan, Regina and Alberta in Canada, and the Universite di Bologna in Italy, discovered the skeleton of a hadrosaurid dinosaur with parts of its scaly skin preserved—not an all uncommon thing in Alberta. What they didn’t realise at the time was that the skin was exquisitely preserved, right down to the microscopic level. 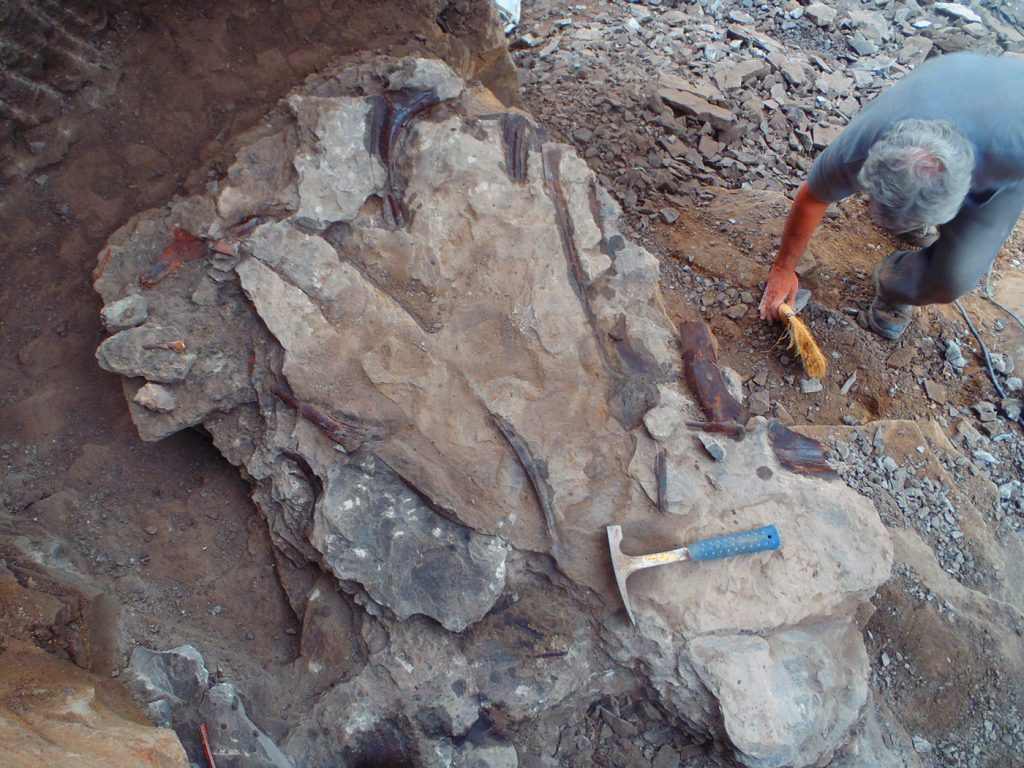 They took a deep dive into the skin, analysing a sample at the Canadian Light Source, a synchrotron facility of the University of Saskatchewan that generates penetrative light several orders of magnitude brighter than a conventional X-ray machine. They could describe it at the atomic and molecular level.

Using beamlines and techniques that enabled them to understand the 3D structure, Phil and the team pieced together this dinosaur’s history, and how its skin was so well preserved. The dinosaur had been buried by sand and plant debris deposited by an ancient river, which slowed decay by limiting the amount of oxygen for decomposing bacteria to feed on. Mud directly enshrouding the skin also provided a physical barrier to outside organisms, and high quantities of iron in the mud likely helped in the preservation of the soft tissue.

Under a microscope, the scales were composed of repeating layers rich in organic carbon, corresponding precisely to the outer fingernail-like covering on the scale of a snake or lizard. In fact, comparing this with the skin of modern animals, the 72-million-year-old hadrosaur had scales that very closely resembled that of a current-day crocodile.

This is a big deal because dinosaur skin is often interpreted as an impression (like a footprint). The Albertan discovery shows that even dinosaur skin—soft tissue that is among the first remains to decompose after death—can fossilise in extraordinary detail.

Keep an eye out for other COOL DISCOVERIES in our newsletters throughout 2020….