Posted at 14:44h in Voyager news by verso
Share

My name is Dr. Kieran Meaney, and I’m a geologist. Most people think that means I study rocks and look for gold, but what I really do is study the history of the Earth. Rocks are where the Earth’s story is written, but sometimes it’s just a little bit hard to read. That’s where we geologists come in.

I’m not originally from Armidale, or even New South Wales. Until the start of 2019 I lived in Adelaide, and when I first moved to New South Wales I was amazed at how different the rocks and landscapes were. I knew almost nothing about the geology around Armidale. There are quite a few cool waterfalls and deep valleys to the east, gentle hills and plains to the west, but WHY is it like that? The answer, of course, is due to the rocks. After spending a year here I now know a bit more about what’s going on. 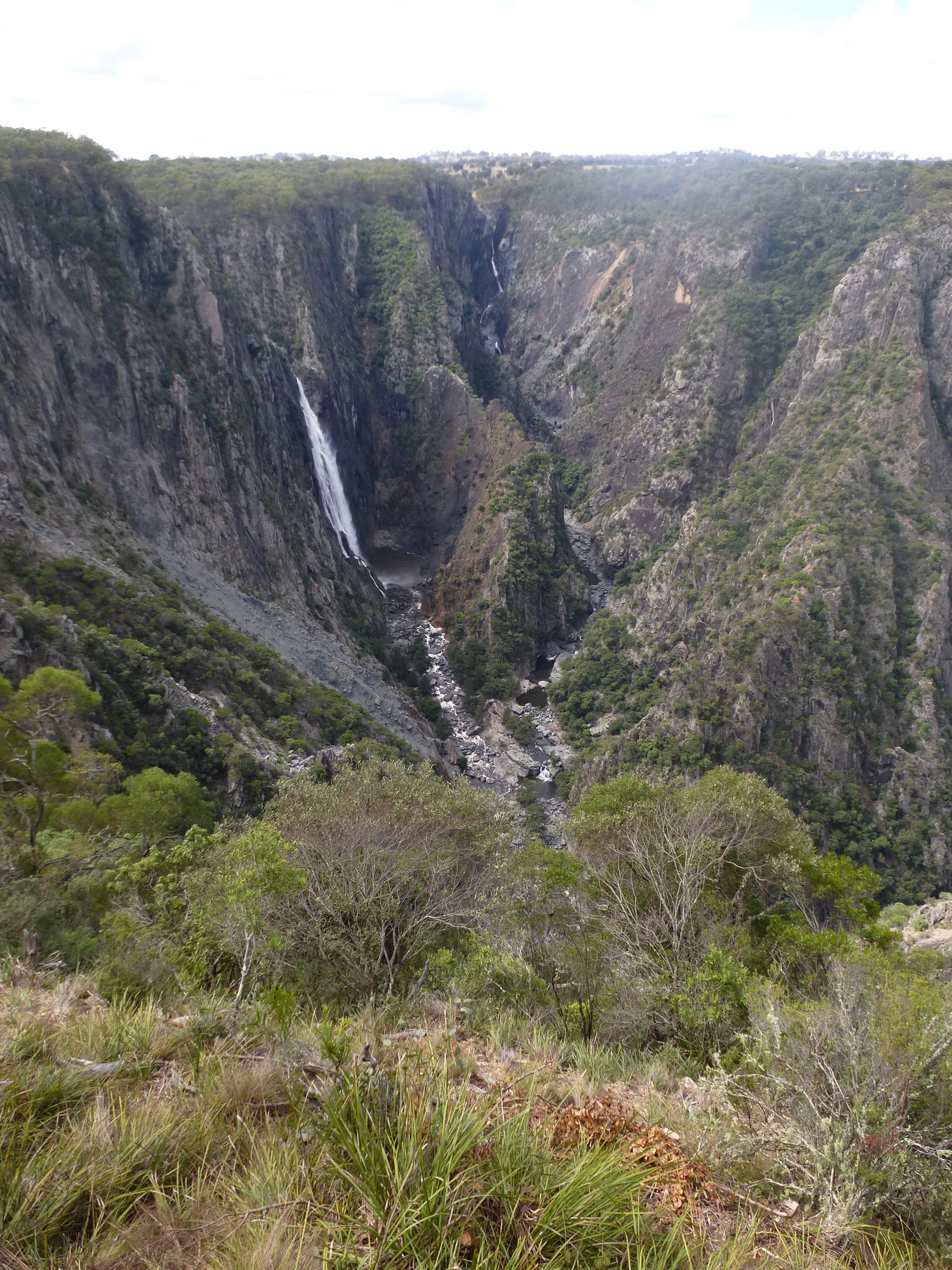 Wollomombi Gorge is very deep due to the layers of rock being tilted upright, making them easier to erode away.

400 Million years ago the New England region was on the bottom of the ocean. Almost all of the rocks to be found look just like the types of sedimentary rocks forming on the deep ocean floor today: lots of mudstone and shale. There are a few places where there are layers of sandstone as well, which tells us that there may have been violent storms that stirred up sand from the beach and washed it out to sea, or perhaps the sea levels dropped and rose again and this would have changed where the beaches were.

So why then, if these rocks formed on the bottom of the ocean, are they now nearly 1000 meters above sea level? The answer to that comes from rocks that are 250 Million years old. Around this time the tectonic plate that made up the sea floor of the Pacific Ocean was moving west and being pushed underneath the Australian continent. This process pushed on the rocks in eastern of Australia and made them buckle, fold, and break. This process created a mountain range that would have looked a bit like the Andes in South America today. As some of the rocks were buried deep under this mountain range they began to melt, which created gigantic pools of molten rock. Much like a lava lamp, this molten rock pushed its way up through the crust and some of it created volcanoes. In other places, it got stuck and froze underground which created granite. From Tenterfield to Tamworth the hillsides are dotted with granite boulders, and all of them formed in the mountain range that was here 250 Million years ago. Since then, however, the landscape has eroded mostly flat again. Any time you drive past a nice round granite boulder in the hillside, think of that old mountain range!

There are places like Wollomombi Gorge which also exist, in part, because of that old mountain range. The layers of rock in this area are not lying flat as they originally formed, but have been tilted and rotated so that the layers are now almost vertical. Because of this, softer layers of rock can be eroded very deep and very quickly which creates the spectacular gorges that are in some places 600 meters deep.

Over the last year as we travelled around we have been collecting rocks and stories to tell about the landscapes and the rocks from all over northern NSW. With these we have been developing a very cool new activity that we call “Think Like A Rock” with lots of new things to play with, and we can’t wait to share them with you all!