Posted at 16:45h in Voyager news by verso
Share

I’m sure you’ve all heard of Beatrix Potter who wrote “The Tale of Peter Rabbit” and many other children’s classics but what you may not know is that she was also a landscape and natural history artist, diarist, farmer and conservationist, responsible for the preservation of large areas of the Lake District in the United Kingdom through her gifts to the National Trust.

Born Helen Beatrix Potter on 28 July 1866, Beatrix grew up in an upper-middle-class household in London, with her brother Bertram. She was educated at home by governesses and grew up mostly with extended family and not much interaction with other children.  The two Potter children were deeply influenced by long family holidays in the countryside, first in Scotland and later in the English Lake District, and presumably by their parents love of nature.

It was during these trips that Beatrix developed a love of landscape, flora, and fauna, all of which she closely observed and painted.

From 1881 to 1897 Beatrix kept a Journal in which she recorded her activities, as well as opinions about society, art and current events. It was written in a code she invented herself, which was not deciphered until 1958. In her sketchbook Beatrix practised observation by drawing; in her Journal she practised it by writing. Both skills were paramount to the success of her books for children. 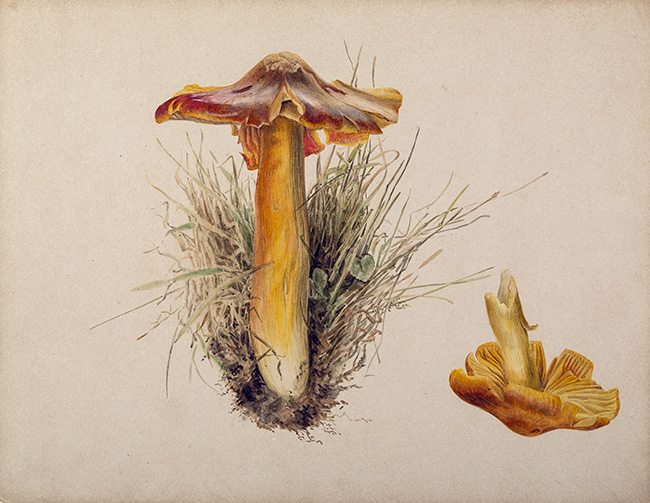 Although Beatrix had sold some of her artwork for greetings cards and illustrations in the early 1890s, she devoted most of her energy to the study of natural history – archaeology, geology, entomology and, especially, mycology, the study of fungi! Fungi appealed to her imagination, both for their evanescent habits and for their coloration. Encouraged by Charles McIntosh, a revered Scottish naturalist, to make her fungi drawings more technically accurate, Potter not only produced beautiful watercolours, but also became an adept scientific illustrator. 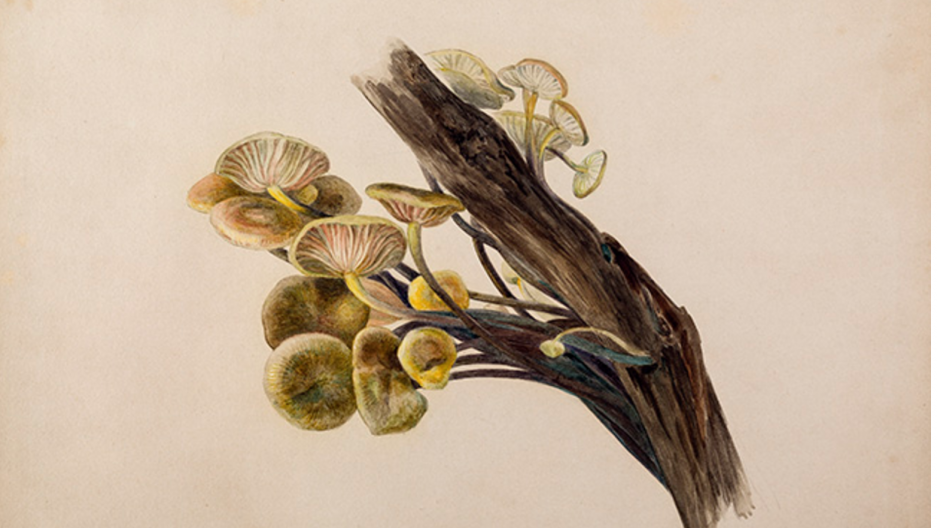 Curious as to how fungi reproduced, Beatrix began microscopic drawings of fungus spores (the agarics) and in 1895 developed a theory of their germination.  By 1896 she had written a paper, ‘On the Germination of the Spores of Agaricineae‘ She did not believe in the theory of symbiosis proposed by Simon Schwendener, the German mycologist, as previously thought; instead, she proposed a more independent process of reproduction. 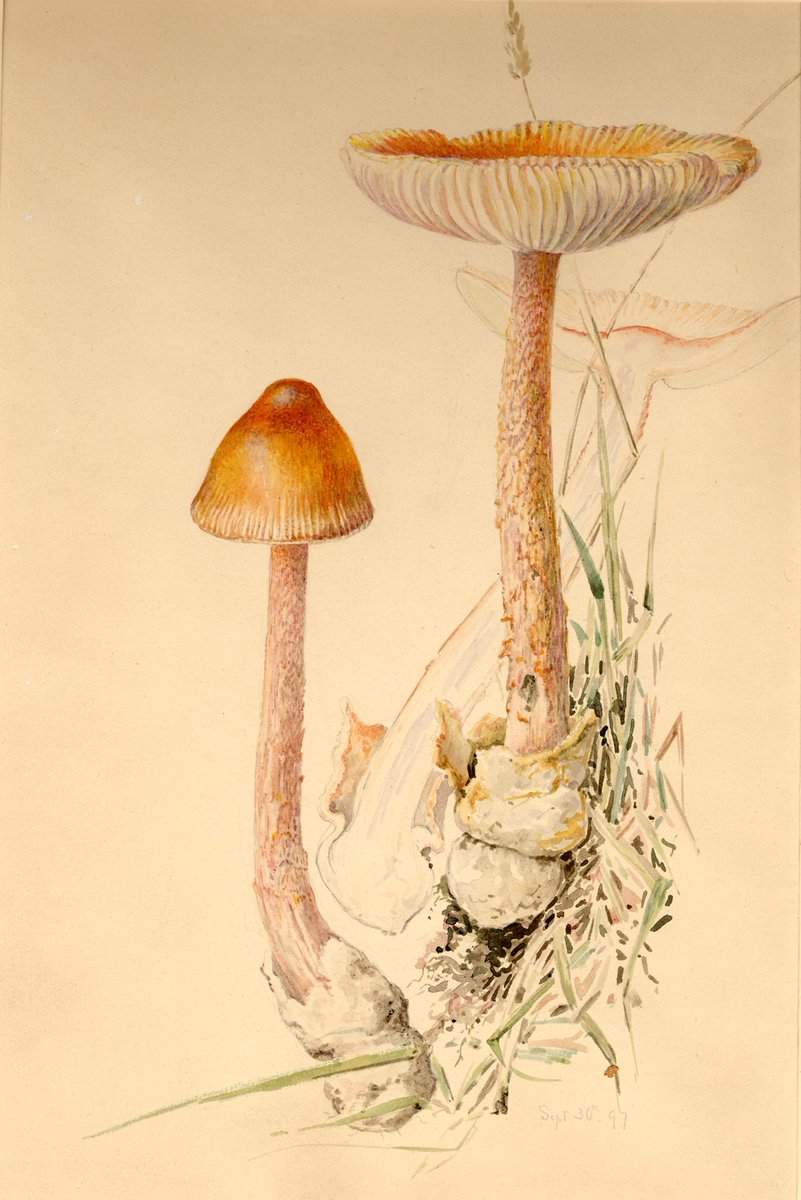 The paper was presented to a meeting of the Linnean Society on 1 April 1897 by one of the mycologists, George Massee, from the Royal Botanic Gardens in Kew, since women could not attend Society meetings.

She subsequently withdrew the paper, realising that some of her samples were contaminated, but she continued her microscopic studies for several more years. Her paper has only recently been rediscovered, along with the rich, artistic illustrations and drawings that accompanied it. Her work is only now being properly evaluated.

Beatrix later gave her other mycological and scientific drawings to the Armitt Museum and Library in Ambleside, UK, where mycologists still refer to them to identify fungi. There is also a collection of her fungus paintings at the Perth Museum and Art Gallery in Perth, Scotland, donated by Charles McIntosh. In 1967, the mycologist W.P.K. Findlay included many of Beatrix’s beautifully accurate fungus drawings in his Wayside & Woodland Fungi, thereby fulfilling her desire to one day have her fungus drawings published in a book. In 1997, the Linnean Society issued a posthumous apology to Potter for the sexism displayed in its handling of her research.

In all, Beatrix wrote thirty books; the best known being her twenty-three children’s tales. With the proceeds from the books and a legacy from an aunt, in 1905 she purchased Hill Top Farm in Near Sawrey, a village in the Lake District. Over the following decades, she purchased additional farms to preserve the unique hill country landscape. 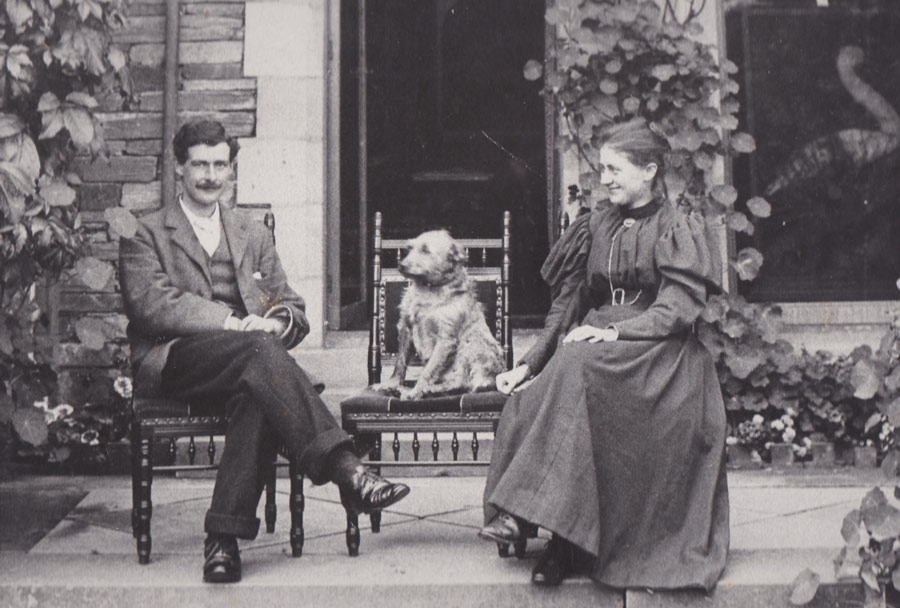 Beatrix with her brother Bertram and the family dog photographed by her father in 1898
Credit: Victoria and Albert Museum, London, (Frederick Warne & Co.)

In 1913, at the age of 47, she married William Heelis, a respected local solicitor from Hawkshead. Beatrix was also a prize-winning breeder of Herdwick sheep and a prosperous farmer keenly interested in land preservation. She continued to write and illustrate, and to design merchandise based on her children’s books for British publisher Warne until the duties of land management and her diminishing eyesight made it difficult to continue.

Beatrix died of pneumonia and heart disease on 22 December 1943 at her home in Near Sawrey at the age of 77. She left almost all her property (15 farms and over four thousand acres) to the National Trust. She is credited with preserving much of the land that now constitutes the Lake District National Park. Beatrix’s books continue to sell throughout the world in many languages with her stories being retold in songs, films, ballet, and animations, and her life depicted in a feature film and television film.