02 Sep How do you weigh a dinosaur?

Posted at 13:26h in Voyager news by verso
Share

UNE Discovery, in collaboration with Dr Nic Campione, developed a palaeontology activity in 2018 called Weighing Giants, which over 650 students across northern NSW have experienced. Now you can read about the research behind it!

How do you weigh a long-extinct dinosaur? A couple of ways, as it turns out, neither of which involve actual weighing — but according to a new study, different approaches still yield strikingly similar results.

New research published on 1 Sep 2020 in the prestigious journal Biological Reviews involved a review of dinosaur body mass estimation techniques carried out over more than a century.

The findings should give us some confidence that we are building an accurate picture of these prehistoric animals, says study leader Dr Nicolás Campione — particularly our knowledge of the more massive dinosaurs that have no correlates in the modern world.

“Body size, in particular body mass, determines almost at all aspects of an animal’s life, including their diet, reproduction, and locomotion,” said Dr Campione, a member of the University of New England’s Palaeoscience Research Centre.

“If we know that we have a good estimate of a dinosaur’s body mass, then we have a firm foundation from which to study and understand their life retrospectively.”

The largest and the smallest: dinosaurs reached an amazing range in size through the Mesozoic Era. Image courtesy of Vitor Silva.

Estimating the mass of a dinosaur like the emblematic Tyrannosaurus rex is no small feat — it is a creature that took its last breath some 66 million years ago and, for the most part, only its bones remain today. It is a challenge that has taxed the ingenuity of palaeobiologists for more than a century. Scientific estimates of the mass of the biggest land predator of all time have differed substantially, ranging from about three tonnes to over 18 tonnes.

The research team led by Dr Campione compiled and reviewed an extensive database of dinosaur body mass estimates reaching back to 1905, to assess whether different approaches for calculating dinosaur mass were clarifying or complicating the science. 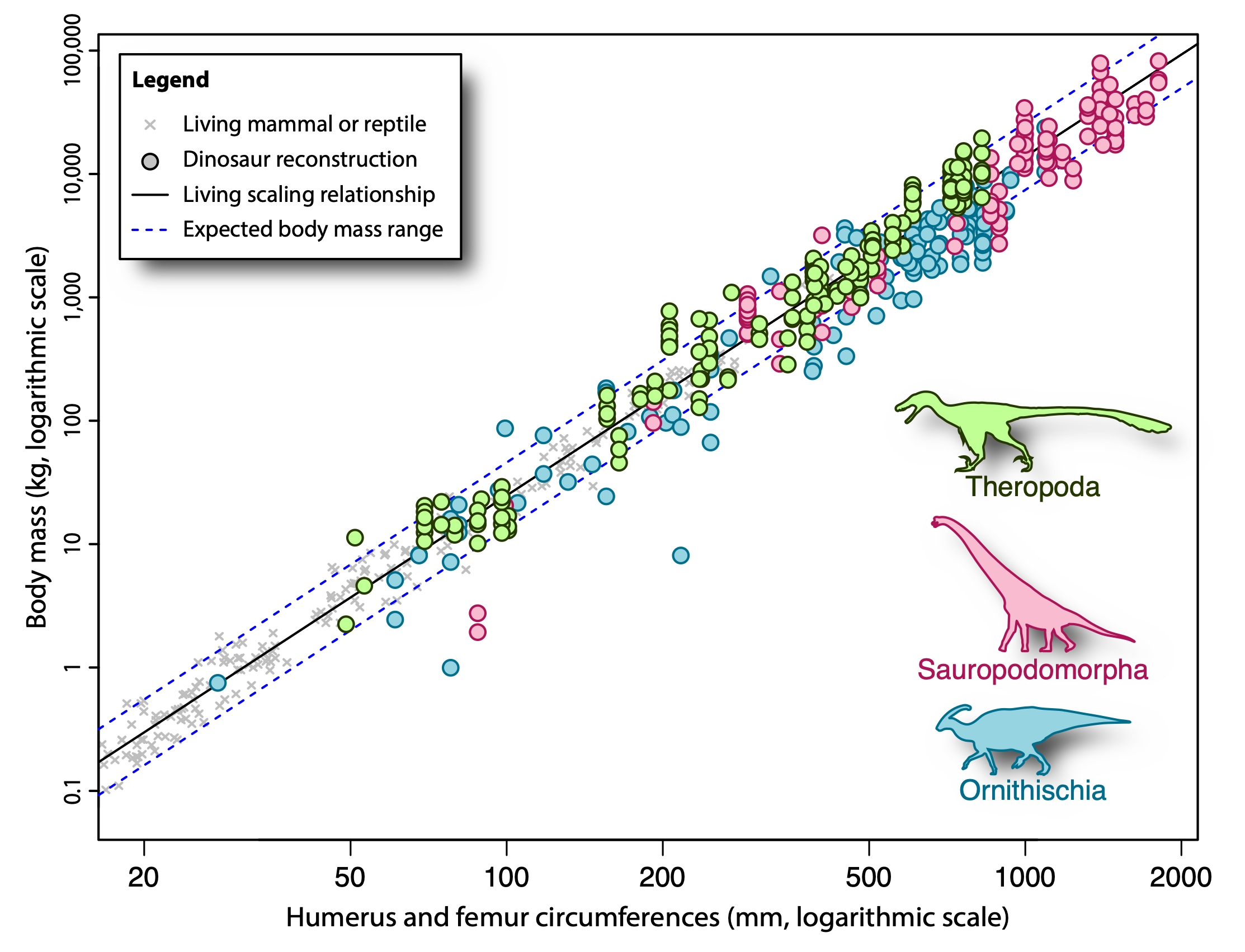 Although a range of different methods to estimating body mass have been tried over the years, they all come down to two fundamental approaches. Scientists have either measured and scaled bones in living animals, such as the circumference of the arm (humerus) and leg (femur) bones, and compared them to dinosaurs; or they have caluculated the volume of three-dimensional reconstructions that approximate what the animal may have looked like in real life. Debate over which method is ‘better’ has raged in the literature.

The researchers found that once scaling and reconstruction methods are compared en masse, most estimates agree. Apparent differences are the exception, not the rule.

“In fact, the two approaches are more complementary than antagonistic,” Dr Campione said.

So I encourage you to make the most of our natural playgrounds (in a safe, socially distanced way). Do some investigating into the ideas of nature play, check out what services are available in your area, and think about how you can incorporate nature play into you and your children’s lives. The benefits may astound you

The bone scaling method, which relies on relationships obtained directly from living animals of known body mass, provides a measure of accuracy, but often of low precision; whereas reconstructions that consider the whole skeleton provide precision, but of unknown accuracy. This is because reconstructions depend on our own subjective ideas about what extinct animals looked like, which have changed appreciably over time.

“There will always be uncertainty around our understanding of long-extinct animals, and their weight is always going to be a source of it,” said Dr David Evans, Temerty Chair of Vertebrate Palaeontology at the Royal Ontario Museum in Toronto, senior author on the new paper. “Our new study suggests we are getting better at weighing dinosaurs, and it paves the way for more realistic dinosaur body mass estimation in the future.”

The researchers recommend that future work seeking to estimate the sizes of Mesozoic dinosaurs, and other extinct animals, need to better-integrate the scaling and reconstruction approaches to reap their benefits.

So I encourage you to make the most of our natural playgrounds (in a safe, socially distanced way). Do some investigating into the ideas of nature play, check out what services are available in your area, and think about how you can incorporate nature play into you and your children’s lives. The benefits may astound you 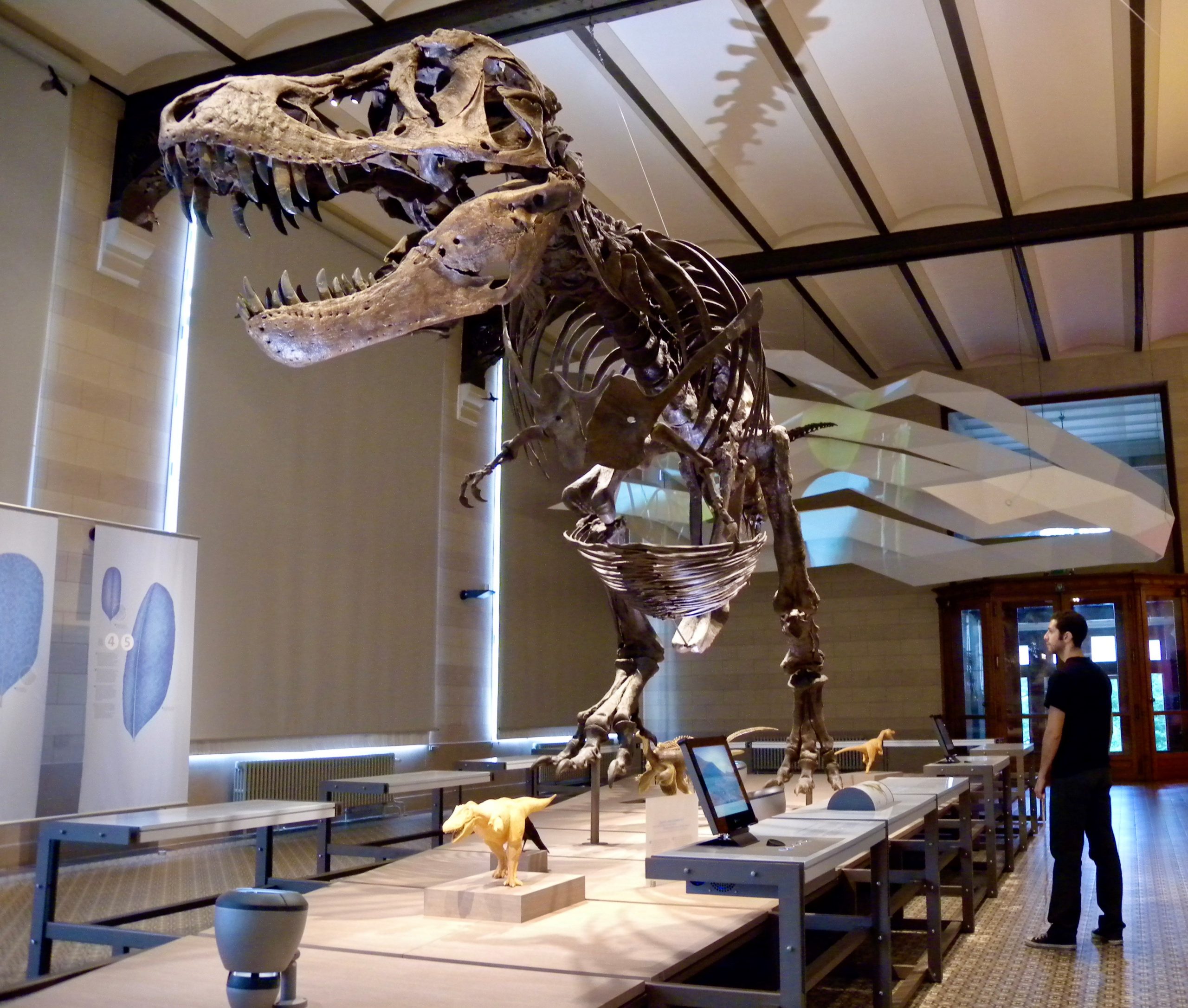 Dr Nicolás Campione standing beside a cast of Tyrannosaurus rex at the Royal Belgian Institute of Natural Sciences in 2009. Image courtesy of Dr David Evans.

Drs Campione and Evans suggest that an adult T. rex would have weighed approximately seven tonnes — an estimate that is consistent across reconstruction and limb bone scaling approaches alike. But the research emphasizes the inaccuracy of such single values and the importance of incorporating uncertainty in mass estimates, not least because dinosaurs, like humans, did not come in one neat package. Such uncertainties suggest an average minimum weight of five tonnes and a maximum average weight of 10 tonnes for the ‘king’ of dinosaurs.

“It is only through the combined use of these methods and through understanding their limits and uncertainties that we can begin to reveal the lives of these, and other, long-extinct animals,” Dr Campione said.