05 May Doughboy Scallops – say what? 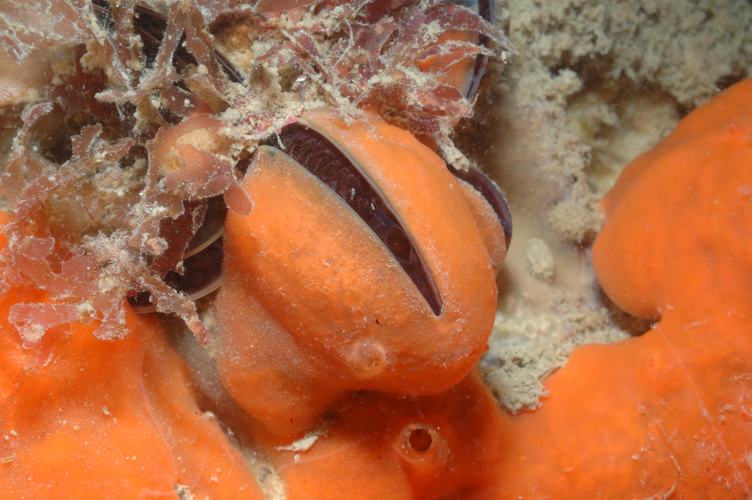 I was fascinated by some amazing video footage shown on the Australian Geographic Facebook page this week – a doughboy scallop swimming in the waters of Tasmania!

A ‘doughboy scallop’- yes, you read that correctly. I was so intrigued. I’d never heard of one before.

I’ve heard of a Tasmanian scallop (from the Pectinidae family) – my dad used to buy them from the local takeaway shop when I was a kid and it was Friday fish n’ chips night. He thought they were so tasty!

Tasmanian scallops have a thin shell, found in Australia’s southern waters from mid-NSW coast down and around into mid-WA. They are found to depths of at least 120m over bare, soft sand or mud. Their shells have equal-sized, circular shaped shells with about 15 radiating ribs. They are fished commercially with a fishing licence, and are managed by a total allowable catch size and seasonal and spatial closures.  The edible part of the scallop is the white flesh with the orange roe (eggs) section attached. 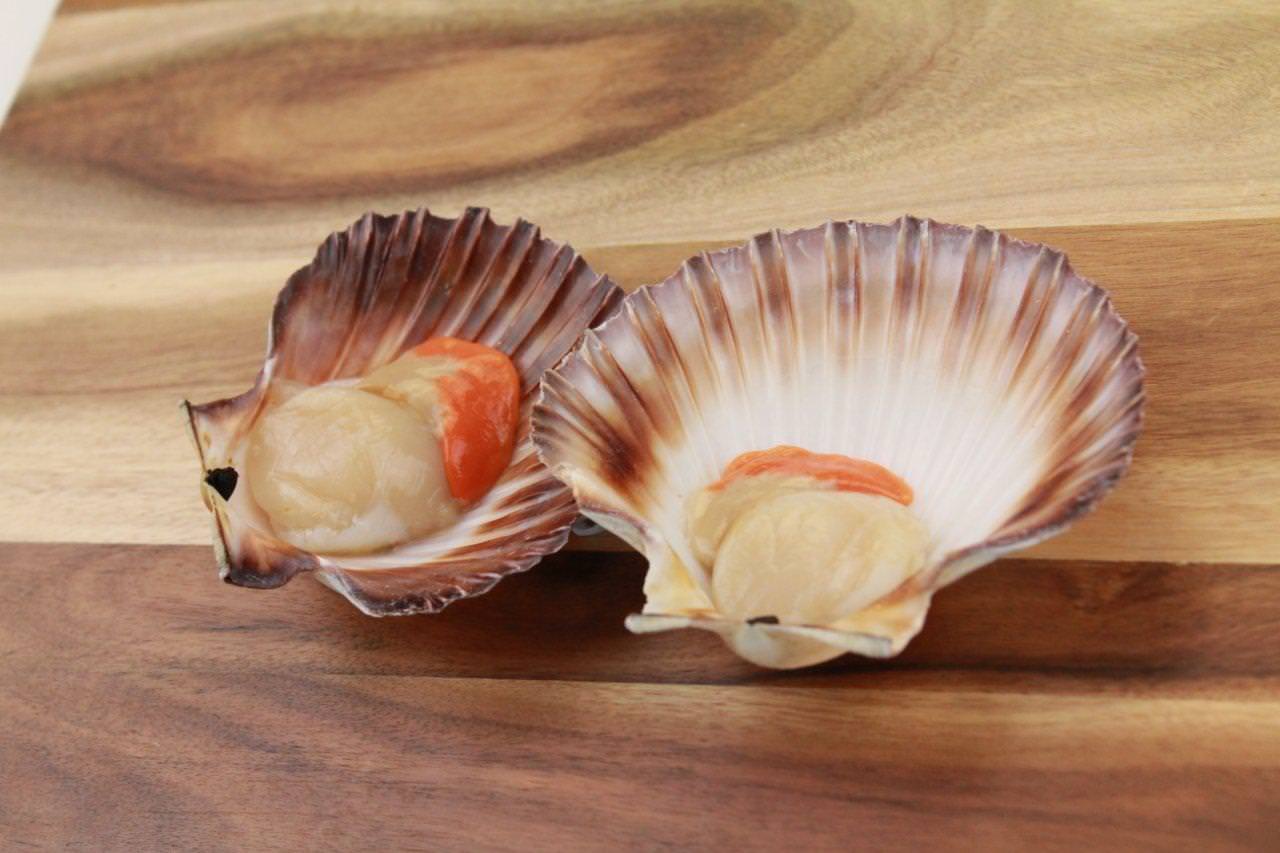 I digress, the Tassie scallop of my youth was definitely not one of these ‘doughboy’ varieties.

The Chlamys asperrimus is the doughboy scallop and is also called a sponge scallop or prickly scallop.  Doughboy scallops have equal-sized, circular shaped shells with 20-26 radiating ribs, and two small wings at the hinge. Both shells are convex, and vary in colour from orange to pink, with bright blue eyes around the edge. They live attached by byssus (threads they use to attach themselves) to hard surfaces or solid objects. They aggregate into beds and bury themselves in soft sediment ranging from mud to coarse sand so that only the top shell is visible. They are found at depths of 2-110 metres.

While mainly sedentary, scallops can swim by rapidly opening and closing their shells, usually when disturbed by predators.  (Video link below) 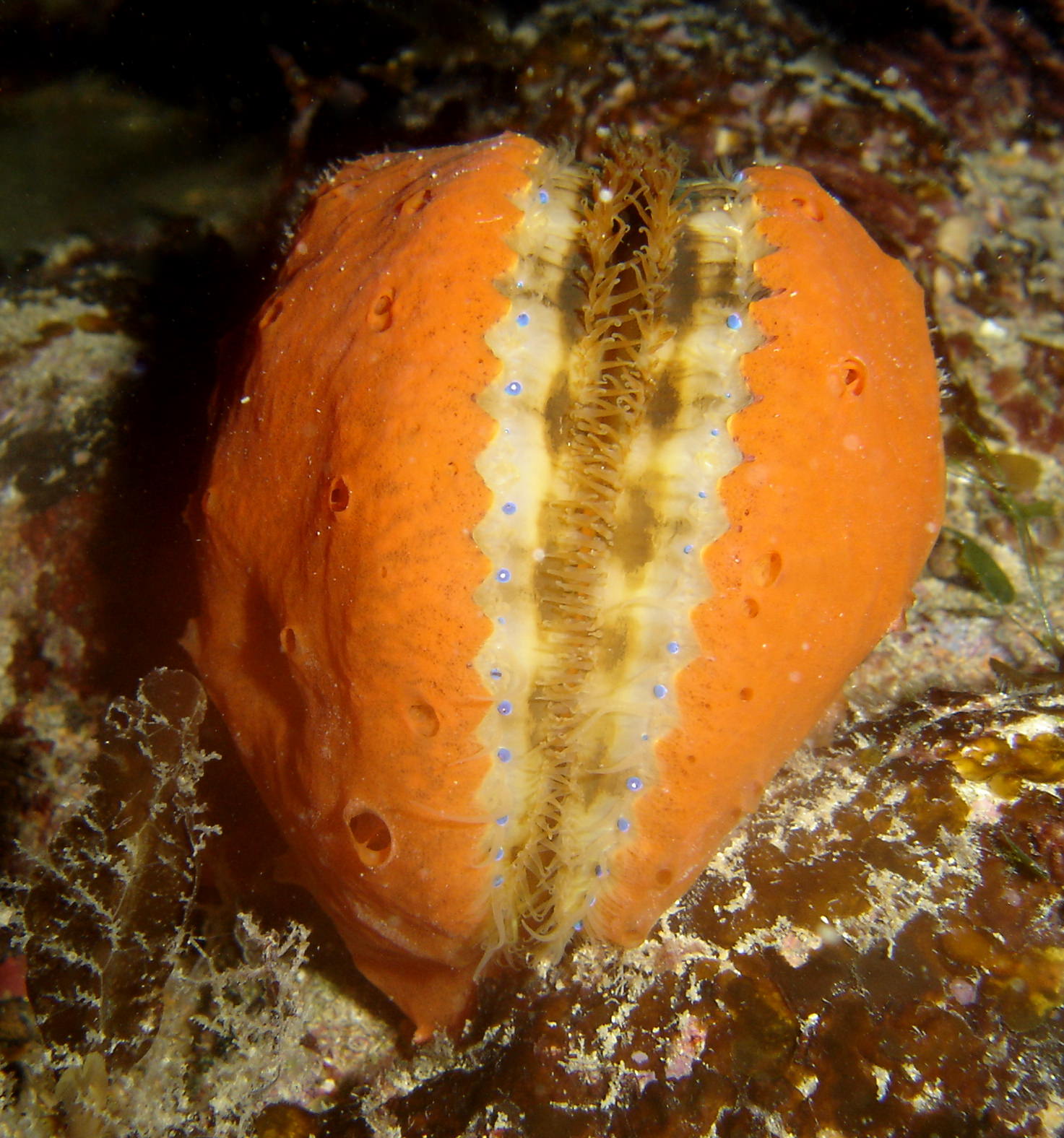 Doughboy scallops often have sponges growing on top of their shell.  It is unknown why they grow there but it may be to help hide the scallops in the reef or stop predators smelling the scallop. Doughboy Scallops, like all species in this family, release their spawn into the water column for fertilisation to occur externally. This produces planktonic larvae, which feed in the water column before metamorphosing. The eyes around the edge of their mantle are more complex than most bivalves’ and allow the scallop to detect not just light and dark but also motion.

So how did we end up with a scallop called a doughboy?  I’ve searched long and hard and I can’t find any information on the naming.

Apparently a ‘doughboy’ is a boiled or deep-fried dumpling, and is also a slang or nickname for a US soldier, especially one in the First World War.  So perhaps the doughboy scallop actually looked like a dumpling to someone, sometime. Let’s go with that.

Since writing the above story, more footage and interesting information has been written and published by Australian Geographic. If you’re truly fascinated like me, read the next article from 3 May 21. The eyes have it! https://www.facebook.com/ausgeo/posts/10158220593693339