18 Oct On the Topic of Tornadoes

Posted at 14:28h in Curiosity Series by verso
Share

If you’ve been watching the news or live locally, you would know that Armidale was recently hit by a very dangerous tornado.  The massive storm that spawned the tornado occurred just after 10pm on Thursday 14 October.

We were relieved to learn that no one was injured, but the damage to homes and property was extensive.  Our thoughts are with anyone who was affected by the storm and we hope you recover well.  UNE was also in the direct path of the tornado, and a number of older buildings on campus were destroyed and many large campus trees were knocked over – some show evidence of being twisted from their base, picked up, and thrown across carparks or onto buildings. 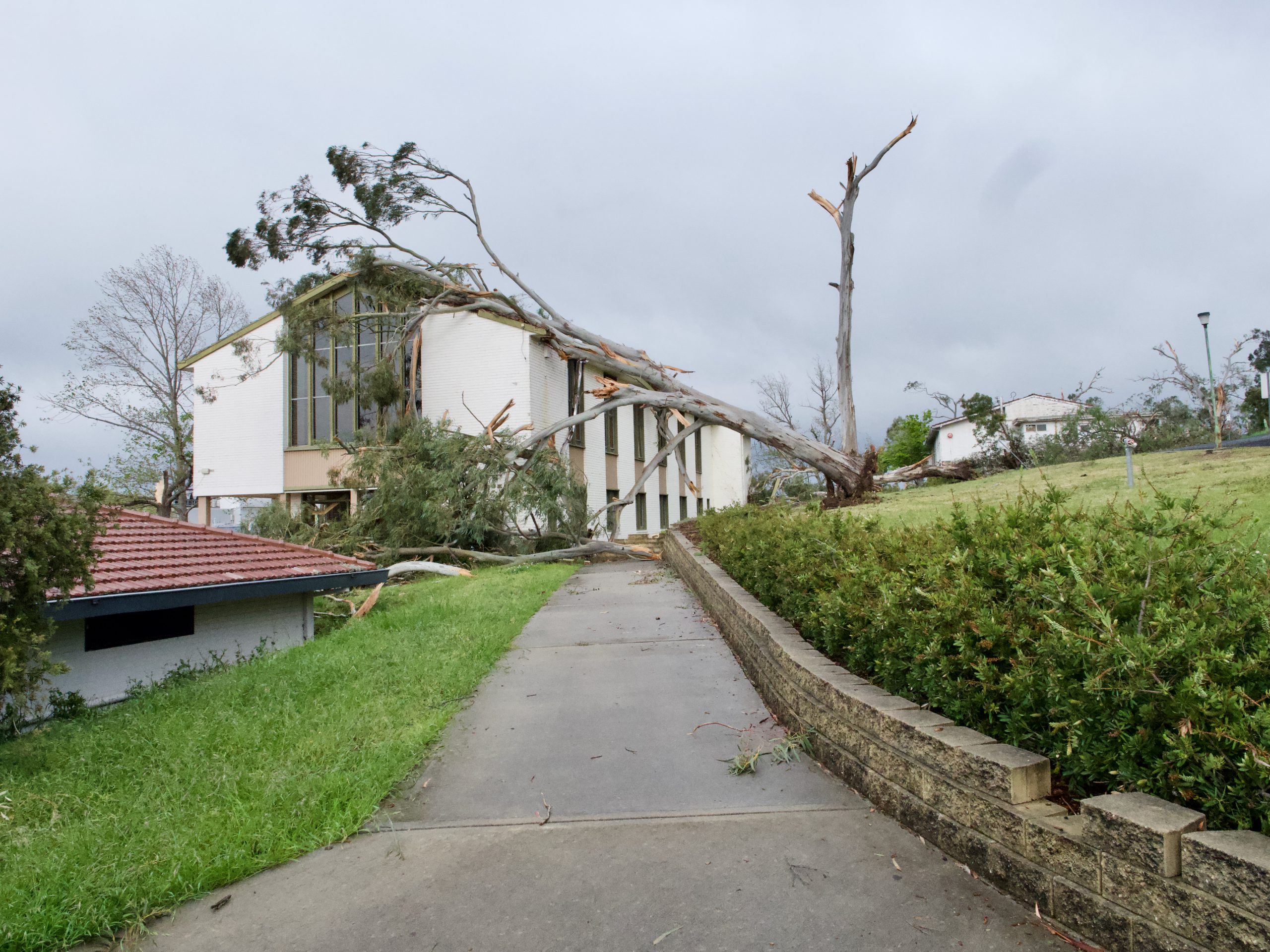 How did we end up with a tornado, you might ask? Tornadoes are actually quite common in Australia, but most occur in remote areas, or cause little damage, so a lot of them go unnoticed.

Australia has expanses of flat land — usually agricultural land — and it’s over these large, flat areas that tornadoes are more likely to form. It’s much the same in “Tornado Alley”, a stretch of central United States where tornadoes are most frequent. Thunderstorms develop over these areas of flat land due to the warm, moist air colliding with a front of cold, dry air – these are the conditions it takes for a storm to be born. 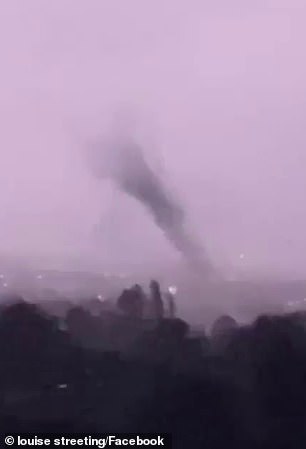 Tornadoes form from ‘supercell’ thunderstorms. These large storms have winds already in rotation at their centre that can be the nucleus of a tornado. As the supercell grows in size, the vortex of air starts to tilt, sucking warm moist air upwards, and spewing colder dry air back towards the ground. The updraft causes the spiral of air to grow in size – and as it gains moisture it also becomes heavier. The cooler downdraft battles to warm updraft causing the funnel to become more focused and spiral faster. The pressure from the downdraft of cool air and all that heavy moisture can eventually force the spiral to touch down on the ground. At this point, a tornado is born. About one in a thousand storms becomes a supercell, and one in five or six supercells spawns a tornado.

How long they live on the ground and how far they travel influences the scale of damage. Most tornadoes only last a few minutes, but in Tornado Alley, tornadoes of 500m in diameter on the ground that lasted for many hours have been recorded. Other tornadoes touch down briefly and are quite narrow, perhaps just 20m across. They might run for a few metres and then peter out.

Tornadoes are unpredictable – one house out on a street might be reduce to a pile of debris, and other houses are unscathed. Or the opposite can happen — with every house on the street smashed but one. Eventually, tornadoes run out of energy. If the base of the funnel loses contact with the ground, it dies.

Much like other types of natural hazards, tornadoes can be classified according to their impact. The magnitude scale for tornadoes is called the Enhanced Fujita scale, which goes from 0-5 (where F5 is the biggest). It’s too early to say what the recent Armidale tornado measured on the Fujita scale because damage surveys are yet to be completed, but early reports of damage appear consistent with a F1 tornado, meaning wind speeds in excess of 116 kms per hour were experienced. From the pattern of damage left in its wake, it seems the tornado was perhaps 50m wide at its base.

Our UNE colleague, Dr Manu Saunders, was curious about how common tornadoes are on the New England Tableland. The Bureau of Meteorology’s (BOM) tornado archive lists 27 tornadoes for the Northern Tablelands since 1892. Most of these occurred away from towns and did little to no damage. Only one is recorded to have caused building damage in Armidale (south) in January 1931. However, Manu also uncovered a newspaper report in the Trove archives from February 1954 that described another tornado (not recorded in the BOM database) that caused extensive damage through the centre of town. 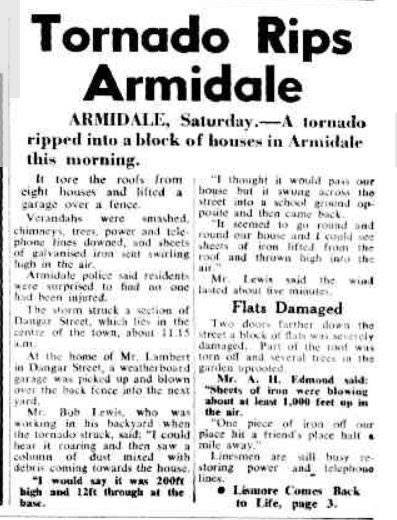 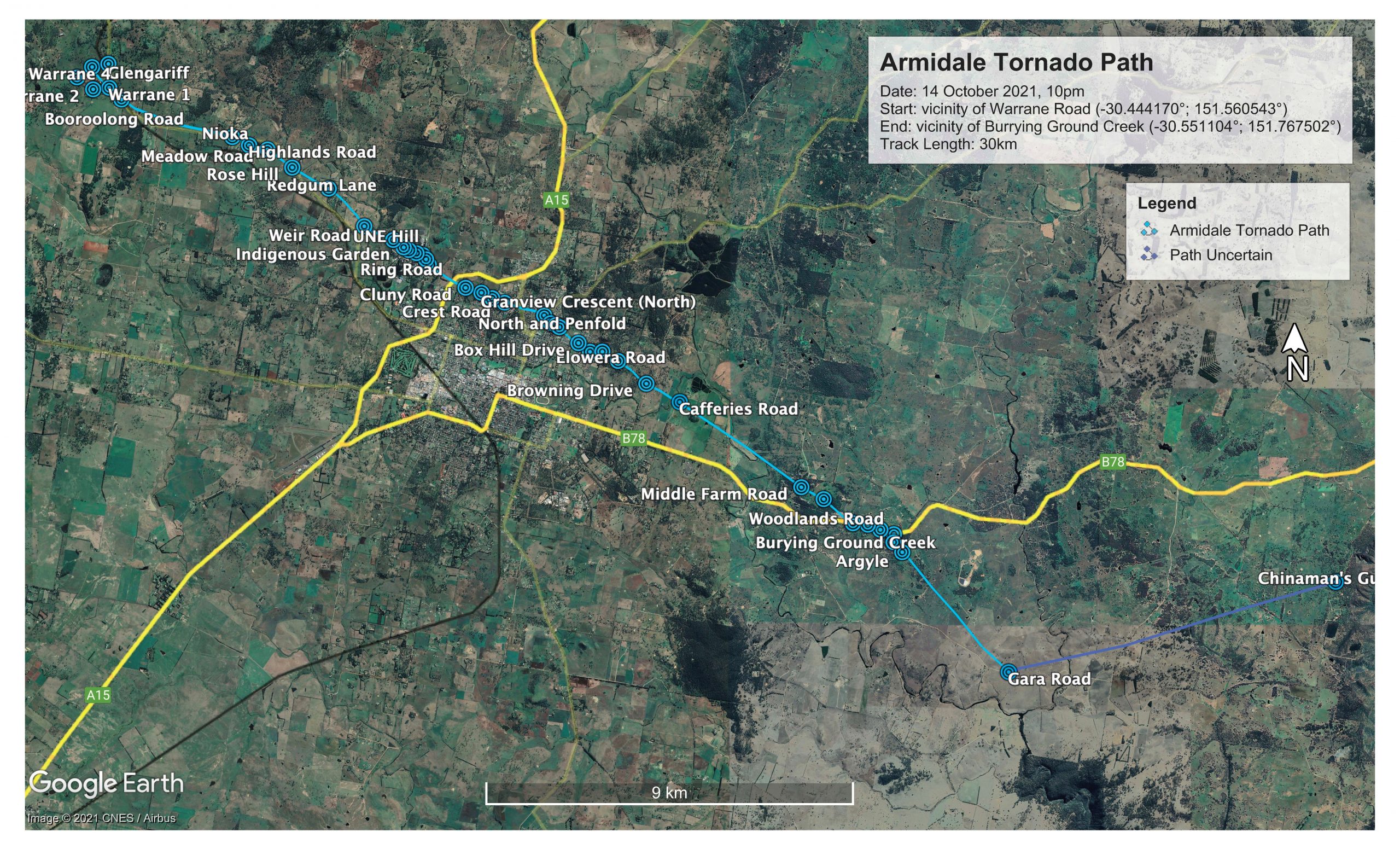 The path of last week’s tornado in Armidale has been mapped by UNE’s Associate Professor Karl Vernes. It shows the tornado’s track from the west, running through the northern part of the UNE campus before roaring through the densely populated North Hill region of Armidale (see map below) and then continuing east towards the gorges. It appears to have first touched down near to Warrane Road (off Booroolong Road) about 12 km North-West of Armidale, and petered out near Metz Gorge more than 20km to the East; so it travelled more than 30km across our region.

There is now a massive clean-up effort underway in Armidale.  The devastation and damage the tornado caused as it ploughed through the northern area of Armidale has left many without their homes, huge repair bills, and some truly frightening memories.  We hope all those affected can stay positive and we wish everyone well in the coming weeks as we recover from a natural disaster that Armidale will remember for years to come.