14 May Sharing Genes with the Octopus

The octopus’ brain and the human brain share the same ‘jumping genes’. Now there’s a revelation!

The octopus is thought to be one of the most intelligent invertebrates (ie. no backbone). They have demonstrated intelligence in a variety of ways, including solving mazes, tricky tasks for food rewards, and their amazing escapades are the focus of many hit videos.

A new study has identified an important molecular analogy that could explain the remarkable intelligence of these invertebrates. 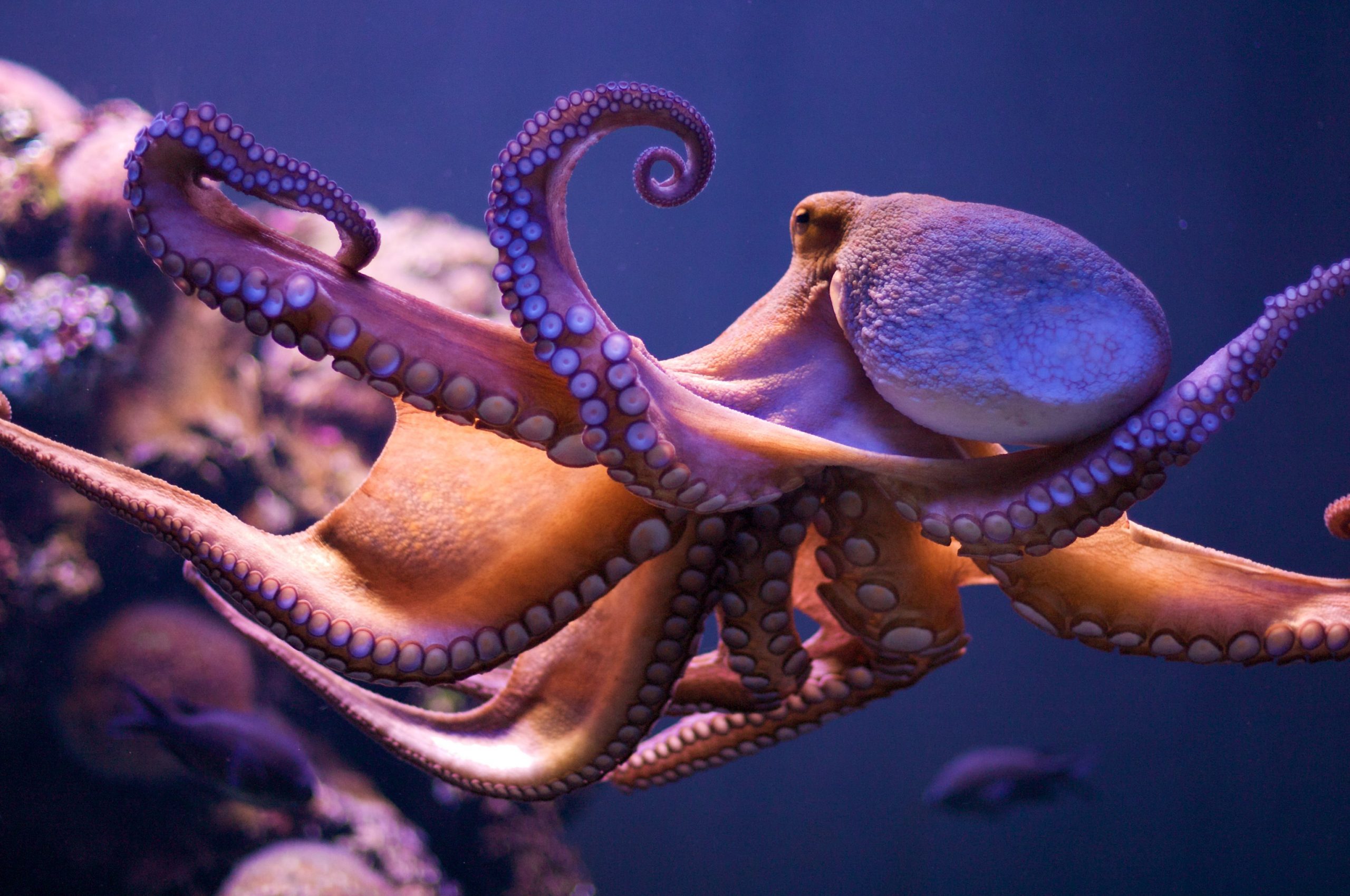 The octopus is an exceptional organism with an extremely complex brain and cognitive abilities that are unique among invertebrates. So much so that in some ways it has more in common with vertebrates than with invertebrates. The neural and cognitive complexity of these animals could originate from a molecular analogy with the human brain, as discovered by a research paper recently published in BMC Biology and coordinated by Remo Sanges from SISSA of Trieste and by Graziano Fiorito from Stazione Zoologica Anton Dohrn of Naples.

The research shows that the same ‘jumping genes’ are active both in the human brain and in the brain of two species, Octopus vulgaris, the common octopus, and Octopus bimaculoides, the Californian octopus. A discovery that could help us understand the secret of the intelligence of these fascinating organisms.

Sequencing of the human genome (that is, all our DNA) showed that transposons, or ‘jumping-genes’, made up over 45% of our genes. These amazing genes are able to ‘move’ throughout genomes, shuffling or duplicating as they go. Generally, transposons are inactive or cause no visible effects, but they are considered to have played a key role in the process of evolution. In fact, recent studies suggest that transposons might still help fine-regulate the brain and many scientists believe that these transposons are associated with learning and memory.

The genomes of octopuses are also rich in transposons. While many of these are inactive, researchers have recently identified a particular sub-branch that are not only active in the octopuses, but also present and active in humans! The discovery was made possible with next generation sequencing techniques able to analyze genes active in the nervous system of the octopus.

The discovery is significant as it suggests one possible reason for the intelligence we see in octopuses, and is an example of convergent evolution – when two genetically distant species develop the same molecular characteristic independently.

Here at UNE Discovery, we love all things Octopus so we thought we’d share some fun facts.

Octopuses have 3 hearts. Two pump blood to the gills and a larger heart circulates blood to the rest of the body.

Octopuses have 9 brains. In addition to the central brain, each of 8 arms has a mini-brain that allows it to act independently.

Octopuses have blue blood. They have adapted to cold, low oxygen water by using hemocyanin, a copper rich protein.

If an octopus loses an arm, it can regenerate a perfectly functioning replacement – complete with a new mini-brain – in 100 days

Now that is smart!!