30 May Lyrebirds Really Are Superb

I read a fascinating story about a male lyrebird called ‘James’ recently. By all accounts it’s a true story and not an urban myth. It got me thinking about the mimicking abilities of this amazing bird. A lyrebird is one of two species of ground-dwelling Australian birds. The two species are Menura novaehollanidae, the Superb Lyrebird, which is the larger of the two species, and Menura alberti, Albert’s Lyrebird. Lyrebirds are large passerine birds, amongst the largest in the order. They are ground living birds with strong legs and feet and short rounded wings. They are generally poor fliers and rarely take to the air except for periods of downhill gliding. They are most notable for their impressive ability to mimic natural and artificial sounds from their environment, and the striking beauty of the male bird’s huge tail when it is fanned out in courtship display. Lyrebirds have unique plumes of neutral-coloured tailfeathers and are among Australia’s best-known native birds. 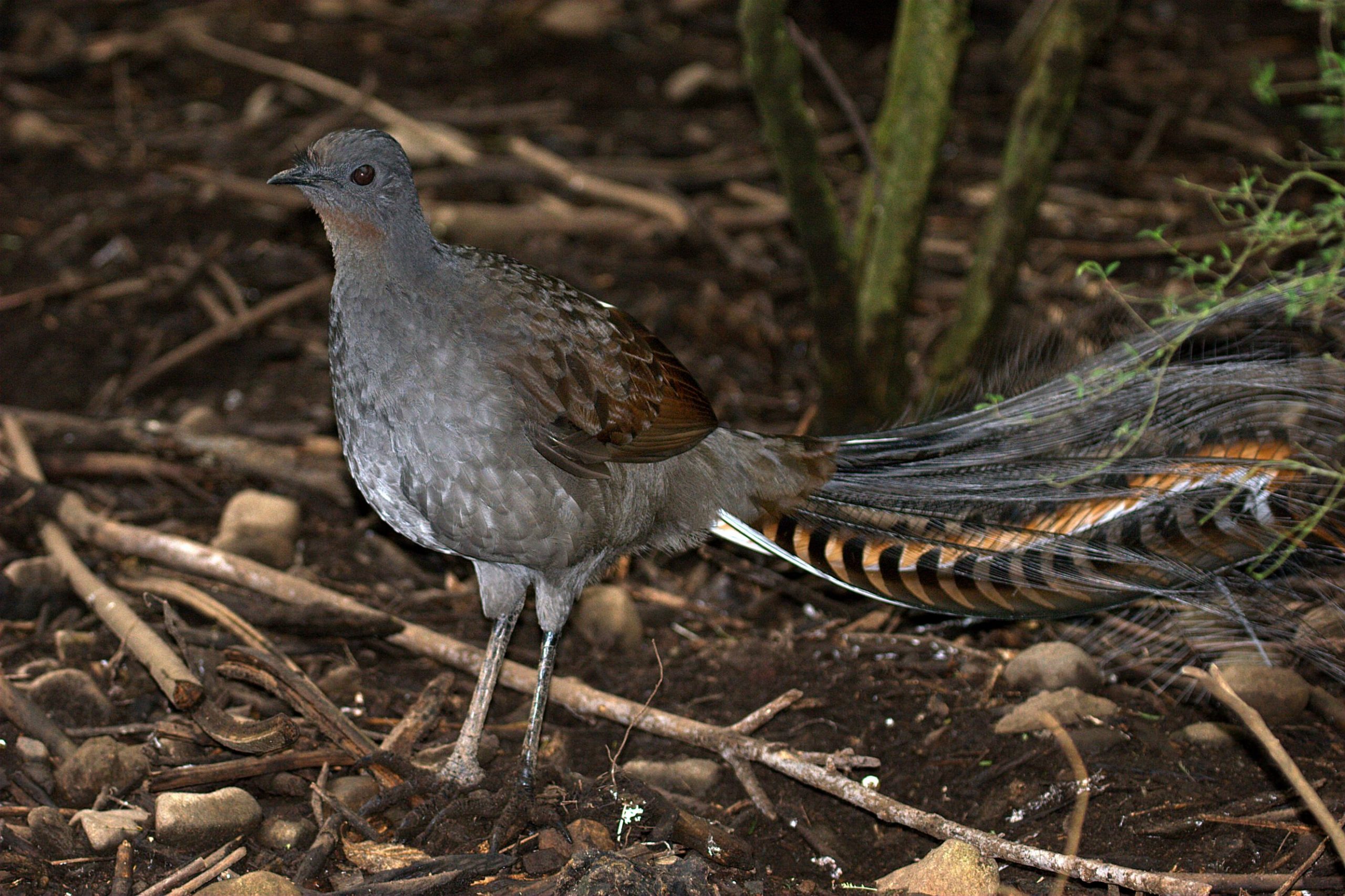 Male lyrebirds call mostly during winter, when they construct and maintain an open arena-mound in dense bush, on which they sing and dance in courtship, to display to potential mates, of which the male lyrebird has several. Females build an untidy nest usually low to the ground in a moist gully where she lays a single egg, and she is the sole parent who incubates the egg over 50 days until it hatches, and she is also the sole carer of the lyrebird chick.

Lyrebirds feed on insects, spiders, earthworms and, occasionally, seeds. They find food by scratching with their feet through the leaf-litter. When in danger, lyrebirds run, rather than fly, being awkward in flight, and have also been seen to take refuge in wombat burrows. Also, firefighters sheltering in mine shafts during bushfires have been joined by lyrebirds.

One researcher, Sydney Curtis, has recorded flute-like lyrebird calls in the vicinity of the New England National Park. Similarly, in 1969, a park ranger, Neville Fenton, recorded a lyrebird song, which resembled flute sounds, also in the New England National Park, near Dorrigo in NSW. After much detective work by Fenton, it was discovered that in the 1930’s, a flute player living on a farm adjoining the park used to play tunes near his pet lyrebird. The lyrebird adopted the tunes into his repertoire, and retained them after release into the park. Neville Fenton forwarded a tape of his recording to Norman Robinson. Because a lyrebird is able to carry two tunes at the same time, Robinson filtered out one of the tunes and put it on the phonograph for the purposes of analysis. The song represents a modified version of two popular tunes in the 1930s: “The Keel Row” and “Mosquito’s Dance”. Musicologist David Rothenberg has endorsed this information. 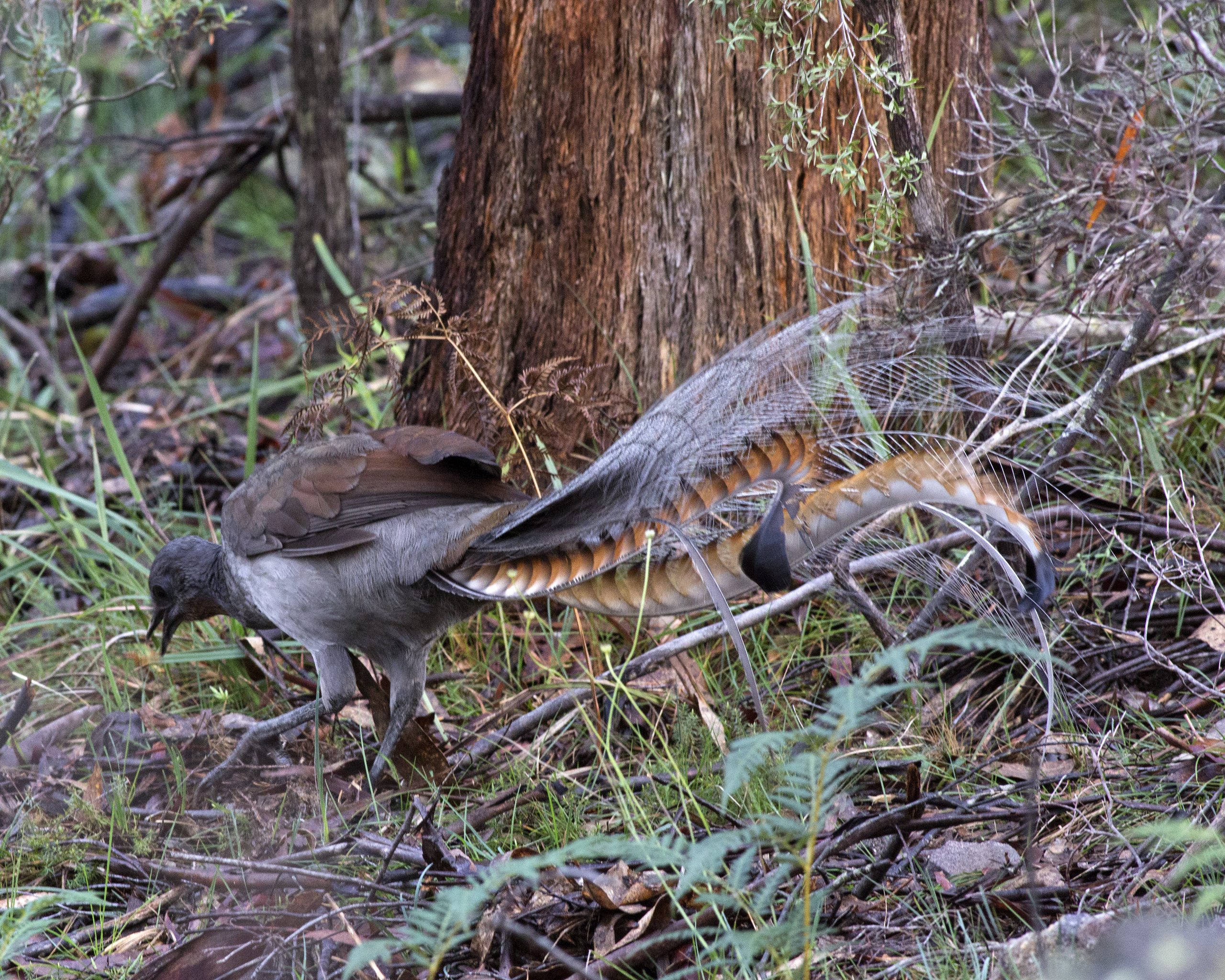 Onto the story of James. During the early 1930s, James, the lyrebird, formed a close bond of friendship with avid gardener and flower grower, Mrs. Edith Wilkinson, after she had been offering food to him over a period of time. James would perform his courtship dance for her on one of his mounds which he had constructed in her backyard — and he would also put on his display for a wider audience, but only when Edith was one of those present.

On one such occasion, James’ performance lasted for forty-three minutes, and included steps to a courtship dance accompanied by his own tune — and also included imitating perfectly the calls of an Australian Magpie, and a young magpie being fed by a parent-bird, an Eastern Whipbird, a Bellbird, a complete laughing-song of a Kookaburra, two Kookaburras laughing in unison, a Yellow-tailed Black-cockatoo, a Gang-gang Cockatoo, an Eastern Rosella, a Pied Butcherbird, a Wattle-bird, a Grey Shrike-thrush, a Thornbill, a White-browed Scrubwren, a Striated Pardalote, a Starling, a Yellow Robin, a Golden Whistler, a flock of parrots whistling in flight, the Crimson Rosella, several other birds whose notes his audience were not able to identify, and the song of honey-eaters (tiny birds with tiny voices), that gather in numbers and “cheep” and twitter in a multitudinous sweet whispering. Quite the repertoire!

In order to mimic the honeyeaters’ singing faithfully, James was obliged to subdue his powerful voice to the faintest pianissimo, but he contrived, nevertheless, to make each individual note of the soft chorus audibly distinct. Also included in James’ performance was his perfect mimicry of the sounds made by a rock-crusher at work, a hydraulic ram, and the tooting of motor-horns. In 1932, Ambrose Pratt, a journalist at The Age, visited Edith’s flower farm and described a performance ”of almost unbelievable beauty”

Jackie Kerin heard about James and Edith Wilkinson when The Australian published a story about the pair.  Jackie retold the story in her book “Lyrebird! A True Story”, illustrated by Peter Gouldthorpe, and celebrates a remarkable friendship between a gardener and one of Australia’s most extraordinary birds. 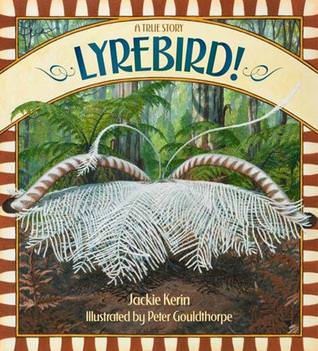 The book is a perfect introduction to bird watching with birds to find in the illustrations and a bird ID chart at the back of the book.  Read more about Jackie here:  https://www.jackiekerin.com.au/author

She has also created a video of her narrating the story which your younger children and students might enjoy: https://www.youtube.com/watch?v=v7H7drsjvxg&t=385s

British naturalist and television host David Attenborough did a great BBC segment on Lyrebirds back in 2007 which includes some wonderful camera shutter imitations, a car alarm and finally, chainsaws. Check it out here:  https://www.youtube.com/watch?v=VjE0Kdfos4Y

The lyrebird has been featured as a symbol and emblem many times, especially in New South Wales and Victoria, and in Queensland (where Albert’s lyrebird has its natural habitat). Here are a few that you can keep an eye out for:

I hope you’ve enjoyed this uncovering of some interesting and unusual details about our well-loved Australian lyrebird. Keep an eye and ear out next time you’re in one of our National Parks, you might be lucky enough to see one of these magnificent birds and hear some beautiful birdsong.