Posted at 16:32h in Citizen Science, Science by verso
Share

The residents of the New England region share their homes with many wonderful species of plants and animals. One that is unique to the Tablelands is the Bell’s turtle (Myuchelys bellii), which may also be unique among all turtles for its unusual diet.

Bell’s turtles are a large (up to 3 kg), freshwater species that lives in the west-flowing streams of New England. They rarely leave the water, and are very shy animals; when they do come out to bask on rocks or logs, they will dive back into the water at the slightest sign of trouble. Bell’s turtles are listed as an Endangered species in NSW, and as Threatened in QLD, where only a small population lives in Girraween National Park. 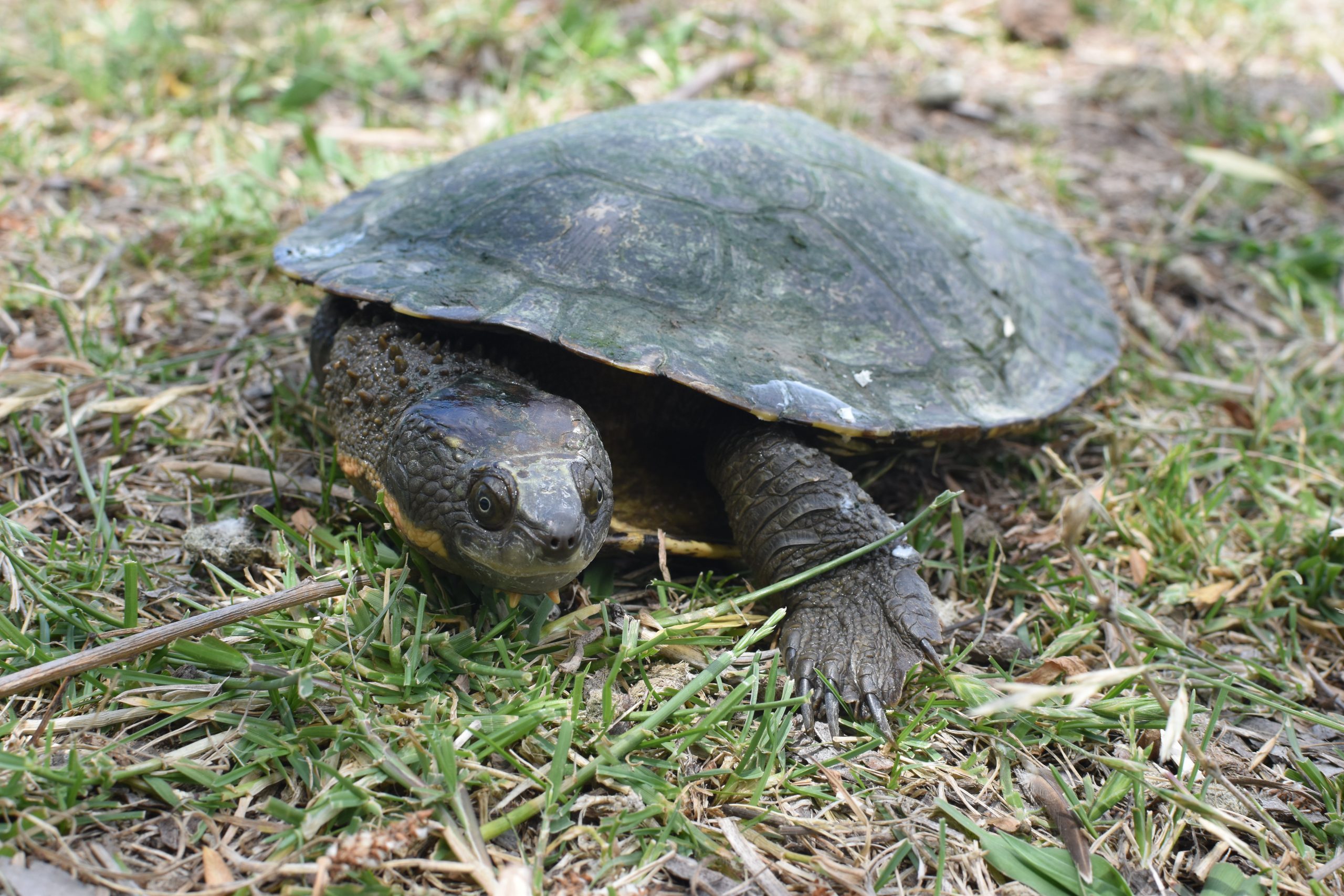 In the spring of 2019, I and some volunteers were out catching Bell’s turtles south of Walcha. As part of my PhD research, I was trying to learn what Bell’s turtles eat. Most freshwater turtles are general omnivores, although there are some exceptions: the long-necked turtles (Chelodina longicollis) that you often see crossing the roads after a rainfall are pure carnivores, for example, eating fish, yabbies, and large insects.

Some things that we knew that Bell’s turtles eat from earlier studies included yabbies, freshwater sponges, and insects, as well as fruits, algae, and aquatic plants. These studies all looked at the turtles’ poop under microscopes to see what identifiable bits remained, whereas I was gently flushing their stomachs with water to see what was in the turtles’ stomach when we caught them.

That day in 2019, I and the volunteers managed to catch two large female Bell’s turtles. When we flushed their stomachs, some yellow-brown goo came out, and we couldn’t figure out what it was in the field. Like any good scientists, we put the mystery goo under a microscope, and it turned out to be masses of tiny crustaceans called Daphnia. Thousands of them; I estimated that one turtle had 3200 in her stomach, and the other had around 1100.

As far as I was able to tell, this is the first time that any scientist has found such large turtles eating such huge numbers of tiny prey like this. This is certainly the neatest discovery of my career, and like most discoveries, it creates a whole host of new questions! Is Daphnia a regular part of their diets? Or at least a seasonal part? Do the turtles nip them out of the water individually, or do they filter feed, like small whales?

All other Bell’s turtles whose stomachs that I flushed had empty stomachs, except for one small male that had a caddisfly larva in it. Don’t worry! Turtles can go fairly long times without food, and have evolved to take advantage of the opportunities that come up, so the turtles that we had caught likely just hadn’t fed that day. As for the two girls that we caught that day, they may have lost a meal, but we have caught them again since and they were doing fine.